Scared Straight: Foot X-Rays that will scare you into better shoes.

Scared Straight:
X-Rays that (hopefully!) will scare you into better shoes...

I wanted to talk about why having a shoe with a thick rigid sole is so crucial for proper foot care.

I have a patient who was kind enough to give me permission to use his story and his x-rays. He is a healthy thirty-something year old man who had a horrible motorcycle accident nine years ago.

When I walked in the exam room, I immediately noticed that his complexion was grey and he looked like he was going to vomit. We talked and he told me that the last time he saw a Podiatrist he was told that he might need an amputation. I quickly eased his fears by telling him that we would only be talking about shoes and inserts and that we should be able to greatly improve his foot by making some simple, non-painful, non-surgical changes to his current shoes and inserts.

He said that three days ago he was walking and heard a 'pop' and felt a pain in his right foot. He stated he didn't have any specific injury but was simply walking. I checked the shoes that he had been walking in and they had an extremely thin, flexible sole.

Let's take a look at his first x-ray (Ignore the arrows please): 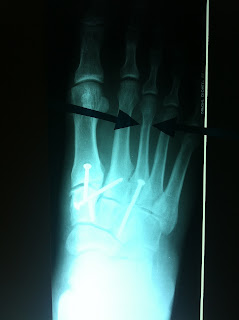 The three screws were placed across his Lisfranc's joint after the motorcycle accident. On the day of the accident, he was wearing a shoe with a flexible sole and, when his foot twisted, multiple bones were broken in the midfoot area and ankle. The surgeon had to perform a joint fusion by placing screws across the Lisfranc's joint. The idea behind this is that if you fuse the joint - you stabilize the joint, limit motion and thereby limit pain. Since the accident, he's always had some degree of foot pain but has managed to stay active.

After the surgery, he didn't realize that he needed to stop walking barefoot and wearing flip-flops and that, after an injury like this, he needed to limit himself to shoes with a thick rigid sole for maximal protection. Not knowing this, he spent the last nine years wearing improper shoe gear.

Let's take a closer look at those screws... 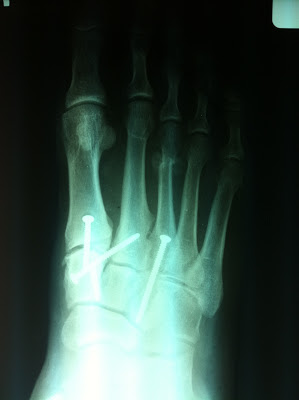 If you look closely, can you see that two of the three screws are broken? The two that are most vertical are the broken screws and, unfortunately, it is harder to see that the one on the right is broken in half - but it is.

My point being, if nine years worth of walking barefoot and wearing flip-flops causes enough stress through the Lisfranc's joint to break two titanium screws - what is all that stress and strain doing to your joints?

The strange part of this story is the problem is not the broken screws or the Lisfranc's joint.

The problem is that he was wearing a flimsy sole shoe and the one  titanium screw that is intact and doing it's job of limiting motion across the joint was not allowing any motion and his body needed motion to walk. The stress on his foot was too much and his body found the motion he needed by breaking the third metatarsal.

Take a look at the arrows. The real problem - the thing that is currently causing him pain - is the new broken bone on the third metatarsal.

We placed him in a below-the-knee walking boot for two weeks and had him come back two weeks later for x-rays.

Two weeks later, the third metatarsal fracture is more easily visualized because it is forming a 'bone callus', which is the body's way of trying to heal itself. 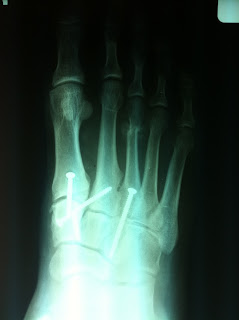 What's interesting is that the broken screws don't matter. They aren't causing any pain so they don't need to be removed. The plan is to heal the current fracture and, once it is healed, make sure he:

And he should be able to lead a normal, healthy, active life!

The moral of the story is: protect your feet!
You'll have a healthier, happier life with less pain and injuries...

My best to all of you!

Posted by Doctor of Podiatry Discusses and Recommends Shoes. at 3:53 PM 15 comments: 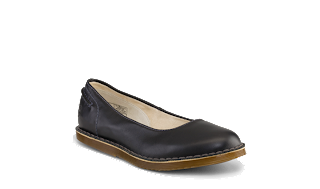 I am not a big fan of ballet slippers because most of them are super-crappy with zero support! After extensive research, Dr. Marten's Christina is the best ballet slipper that I have been able to find. I'm not saying that it's a good choice for everybody but I am saying that for certain people, this is the best choice I could find in the ballet slipper category. I would recommend that you pair this shoe with a dress orthotic to give added arch support for better biomechanical control, which will result in more comfort.

If you have serious forefoot issues or work on your feet for long hours on concrete floors, this shoe is not going to be supportive enough. I would recommend that you 'bump up' to something with more support like the Dansko Volley. Remember to listen to your body! If you try this shoe (or any shoe) and it hurts or find yourself having increased discomfort as the day goes on - don't wear it. It's not good enough for you!

Under normal circumstances, I steer patients away from ballet slippers but I've had so many requests from people who want to know if there is any comfortable ballet slippers that they can wear that I decided to delve into it deeper.

In general, any ballet slipper that bends or flexes is garbage and is going to cause more mechanical strain for your joints, tendons, ligament, ect. This leads to 'tired leg syndrome' and can make you more susceptible to injuries. What makes the Dr. Martin Christina decent is that it does have a thicker, more rigid sole than the typical ballet slipper. I would love to see it thicker and more rigid but - that is hard to find in a ballet slipper type shoe!

I have one patient who loves the ballet slipper so much that I advised her to try this shoe and, if she was comfortable in it, take it to a Cobbler to add more support to the bottom for more protection.

This Shoe is Recommended For Patients with:
*Healthy feet
*No significant biomechanical issues
*No foot pain!

I know it's a limited list for who this shoe is 'recommended' for but if you have foot pain or any significant biomechanical foot or ankle issues, this is not the proper shoe for you.

It is, however, the best choice for someone who is determined to wear ballet slippers and wants to decrease damage and increase comfort from your typical ballet slipper.

I hope this was helpful and I would love to hear any feedback you have on the Dr. Marten's Christina.

Posted by Doctor of Podiatry Discusses and Recommends Shoes. at 12:31 PM 2 comments: 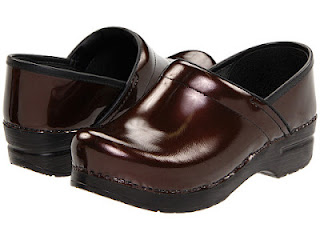 Let me preface this review by saying that the Dansko Clog is not for everyone! There are patients with certain foot types and medical conditions that I would never dream of putting into a Dansko Clog because it would be a disaster for their feet. That being said, I have many patients (including myself) where the Dansko Clog is the very definition of comfort. In Podiatry school, when I went from sitting all day in classes for two years to suddenly being thrown into 14 hour days on my feet on torturous concrete hospital floors for another four years of school and residency, I suffered horribly from heel pain, swelling in my feet and tired leg syndrome. I was a broke student and I made a very painful $95 splurge on purchasing the Dansko Clog and they were one of the best investments I've ever made!

What's great about the Dansko Clog is the thick, rigid and therefore very protective sole. I always feel extra safe wearing my Dansko clogs because if anyone ever tried to mug me, these shoes are so strong that I'm convinced I could effectively use them as a weapon (forgive me, I'm originally from New Jersey!). If you are suffering with forefoot pain of any kind, this may be the perfect shoe for you. They also have decent arch support, a wide toe-box and rear-foot control. I do not recommend the Dansko shoes that don't have rear-foot control as they force the person wearing them to scrunch down their toes to keep in the shoe, which can cause 'mechanical strain' and 'tired leg syndrome' at the end of a long day.

The Dansko Clogs do not accommodate any type of inserts but, in my experience, they don't need extra arch support. It is the one shoe where I don't have to (or need to) wear my orthotics.

In general, the Dansko Clog is great for healthy, young, active patients who are on their feet all day, especially on concrete floors. I would never put anyone who is elderly or has any type of muscular or nerve disorder in these shoes as they are simply too heavy.

Dansko Clogs Are NOT Recommended For Patients With:
*Weak legs
*Muscle disorders that cause instability or weakness of the legs
*Nerve disorders that cause weakness or instability of the legs
*Drop Foot
*Charcot Marie Tooth Disease
*Charcot Foot
*Diabetics
*Diabetics with history of Ulcerations (Open sores)
*Peripheral Arterial Disease (Poor Circulation)
*Peripheral Neuropathy (Nerve Damage)
*Balance Issues
*The Elderly
*Anyone with prominent "bumps" on their feet, especially on the top of the mid-foot area
*Painful Calluses on the bottom of the feet (because they need more cushion in the shoe)
*Severe Rheumatoid Arthritis  (because they need more cushion in the shoe)
*Severe Hypermobility / Ligament Laxity
*Ankle Instability

My best advice to you is go to a store and try them on. You are either going to love them or hate them! Every time I put on my Dansko clogs, I feel like they have been custom made for my feet and can stay on my feet all day in comfort.

Posted by Doctor of Podiatry Discusses and Recommends Shoes. at 2:23 PM 20 comments: 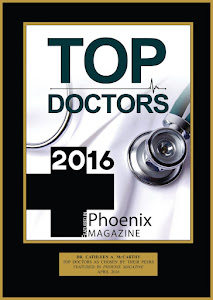 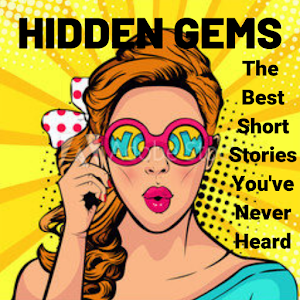 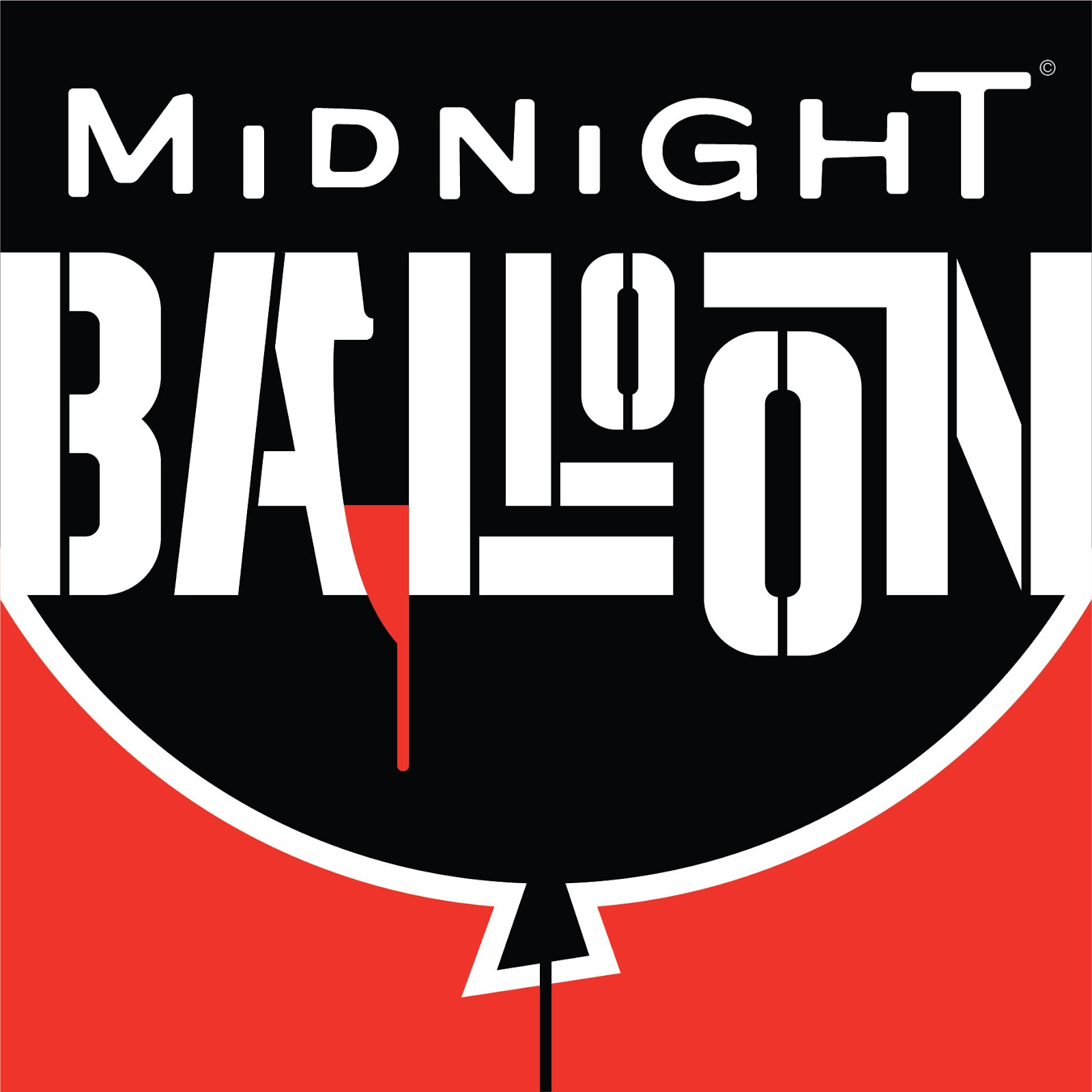